What does Warby Parker need to do to avoid the same fate as Casper? Former Company Group Chairman of Johnson & Johnson, Jeff Smith, joins us to discuss innovation, the CPG industry, and how to survive moving forward as a direct-to-consumer start-up.
What can Warby Parker learn from Casper? W/ former Fortune 50 Chairman & brand builder, Jeff Smith
Parker Dietz & Tom Logan

Jeff Smith served 29 years at Johnson & Johnson, eventually working his way up to Company Group Chairman, where he ran staple brands like Tylenol, Neutrogena, Listerine, and many others. After leaving J&J, Jeff has started a number of ventures, including Ignite Venture Studio - a brand incubator that’s disrupting the start-up quo. Jeff joins us to give his take on Warby Parker’s IPO and what they need to do to avoid Casper’s fate. Later on, he tells us about his company, Honed, that he started with his daughter. 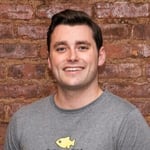 Parker is a staple in our marketing team - Our Marketing Manager brings with him an intimate knowledge of the platform, and is our go-to on technical topics, and user behavior. With a wealth of knowledge about competitors and pricing, Parker is all about exploring the best way to communicate Cohley's benefits. Outside of work, Parker enjoys poorly playing guitar at parties, watching every Adam Sandler movie ever made, and eating Arabic food.

Reasons to use user-generated content in your marketing campaign

How to split your marketing budget to incorporate new media